Fighting Back with the Power of Fun

The story of a proactive father and his creative inventions that train his son to persist
through the challenges of cerebral palsy. 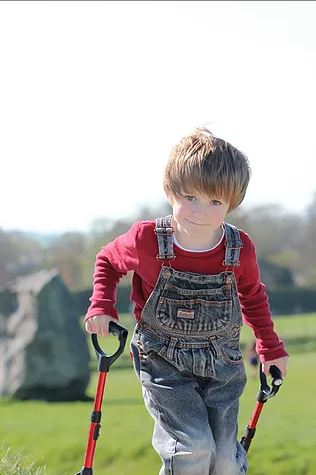 Nine years ago, Marc Gunderson’s son Julian was born three months prematurely, weighing just 1 kg (2.2 lbs) at birth. After one full month in the Intensive Care Unit, and several rounds of treatment thereafter, Julian had faced a lifetime’s worth of challenges in just a short time on earth.

At age one, doctor’s diagnosed Julian with cerebral palsy – one of the most common, non-progressive neuromuscular disorders that affects thousands of children and families around the world.

Cerebral palsy is the result of brain lesions that occur while the child is still in the mother’s womb, which often impacts the child’s muscular development and balance.

While there currently is no cure for cerebral palsy, Marc has decided to take an active and aggressive approach to treat the condition, drawing his drive and inspiration from his son.

Cerebral Palsy is a non-progressive condition, meaning that it does not get worse over time.

In Marc’s opinion, taking the definition of non-progressive at face value is a dangerous thing -- it should instead be dealt with aggressively. His reasons:

Over the years, Marc has designed and developed the JPosture collection of electronic medical training devices used to gauge balance and posture. These inventions include the J-Shoes; biofeedback shoes to track and analyze weight distribution, a laser gun game featuring a weight-bearing platform to track posture while performing an activity, among others.

Most of the JPosture collection of devices incorporates FlexiForce Sensor Technology used to capture force and weight distribution feedback. Whether it’s a tool to measure balance between the heel and toe of his son’s feet, or a creative finger pad device used to refine motor skills, force-sensitive resistor technology has been a critical component in helping Marc develop actionable devices to help train his son to persist and grow despite his debilitating condition. 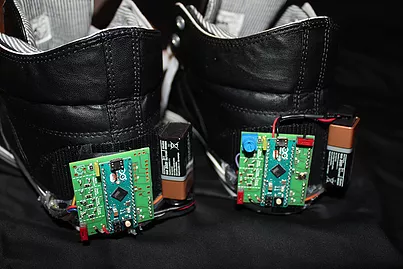 Each shoe is embedded with four FlexiForce sensors, and are connected to Arduino micro controllers. The right shoe is the main controller.

At times, an individual with cerebral palsy may find themselves shifting out of balance while standing. The J-Shoes were developed to track and analyze weight distribution between the user’s feet. 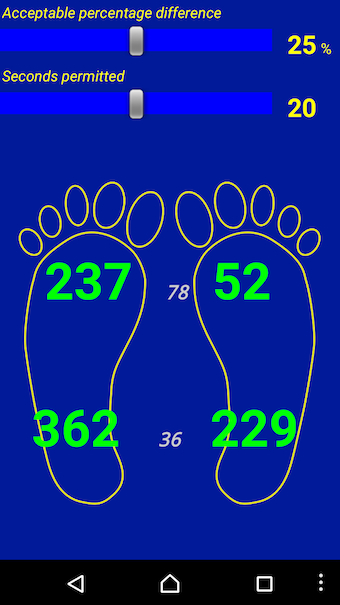 Figure 1: From the J-Shoes app, the user can adjust the acceptable percentage difference, and time permitted, for the user to stand out of balance.

Each shoe has four A401 sensors in the sole, two at the front of the foot, and two under the heel, that communicates to an Android app via Bluetooth. The sensors in either shoe continuously monitor the user’s balance.

Figure 1 shows a screen grab of how the user or caretaker can adjust the acceptable percentage difference between 10-50% (10% being most strict) and the amount of seconds the user can stand out of balance.

If the user stands out of balance beyond the set period of time, a vibrating mechanism will trigger within the shoe to remind the user to correct their posture.

The J-Shoes prototype is a successful, smart method to remind cerebral palsy patients to correct their balance. However, this current iteration is programmed to address Julian’s balance habits.

Marc wishes to work with other inventors to develop more balance codes to address the needs of other kids working on their standing/weight-bearing challenges.

See the J-Shoes in Action

A stay-at-home father, Marc’s line of devices and prototypes aimed to train his son to fight back against cerebral palsy has been a solo venture to this point. Marc hopes to connect with other like-minded inventors who share a similar passion and drive to refine and advance these devices to help more children around the world.

For more information on the JPosture line of inventions

All images and content comes courtesy of Jposture.com, and the Gunderson family.

Subscribe to Tactile Touchpoints to stay in the know.

How Do Thin Position Sensors Work?

How Does a Force Sensing Resistor (FSR) Work?

How to Use Force Sensors for Relative Measurement Applications