This article is the third in a series following one design team’s experience in designing FlexiForce sensors into a medical device to detect occlusion within the pump mechanism. When embedding components like force sensors, following an established framework during and leveraging certain tools can help structure the process and reduce the risk of costly, time-consuming mistakes. Previous articles in this series have addressed the team’s approach to the sensor characterization and proof of concept phases. At this point, the team has determined how the FlexiForce sensor will perform with the circuit they selected, and they have verified that they can successfully capture their intended measurement with a mock-up of their application. Now it’s time to move on to phase 3: prototyping. 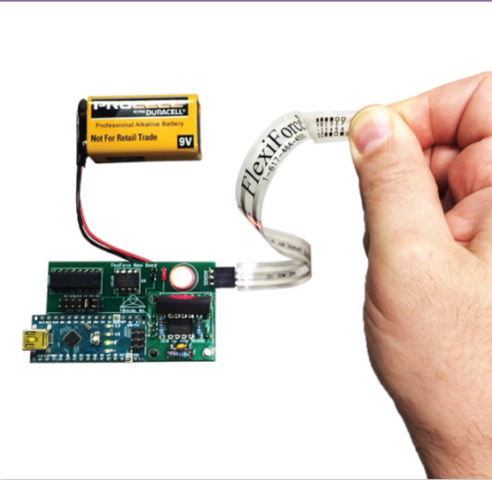 The Alpha Prototype consisted of the pump’s housing, the fluid delivery tube, the embedded sensor, and the voltage divider analog circuit module used in characterization and proof-of-concept phases.

With the linearity of the circuit chosen during the sensor characterization phase, and the adjustments made in the proof-of-concept phase, the design team developed a simple two-point calibration procedure with the help of the FlexiForce Prototyping Kit. The team actually went back to the FlexiForce Characterization Kit loading fixture to apply known loads to the sensor and the chosen interface materials for calibration.

From there, the engineers were able to test performance by running fluid through the tube and monitoring feedback in a separate board display. Because the team had characterized the sensor and proved concept with the same circuitry and material configuration in previous Phases, they were able to troubleshoot any unforeseen performance issues with their benchmark data.

Once the team was satisfied with the sensor performance within their Alpha Prototype, they constructed a Beta Prototype with the same housing and tube, as well as the rest of the HMI components planned for the design (digital screen, dials, buttons, etc). This version of the prototype also incorporated the first rendition of the printed circuit board (PCB) for the application. For the sensor interface circuit of the PCB, the team was able to use the open-source circuit diagrams and layouts of the analog circuit modules to ensure the same type of circuit was integrated into their PCB.

While finalizing the beta prototype, the team noticed the data being output by the sensor was not stable. The sensor output was not repeatable given the assumed constant, cycled load applied to the sensor. The team went back and compared the data collected in the alpha prototype to the repeatability data collected for the same sensor and same circuit in the loading fixture of the FlexiForce Characterization Kit. By looking at the data collected during the repeatability test in characterization, the team was confident that the sensor would produce a repeatable output with their repeatable load. So, the team examined the assembly of the tubing in the prototype to assess whether it was delivering consistent load to the sensor. They discovered the tubing was configured in such a way that it could slightly move off the sensor during use, which was the likely cause of the erratic data they were observing. The team modified the assembly that held the tubing in place so that it would remain in contact with the sensor, finalized the prototype, and presented it to product management for final approval.

The next installment of this series will discuss the team’s approach to the next phase: application and field testing. Ready to skip ahead? Download the 6 Phases of Sensor Integration to follow the team through each subsequent phase.