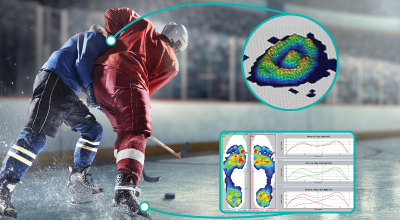 From measuring pressure distribution from impacts, to in-skate foot function analysis, there are several ways to use Tekscan technology in ice hockey studies.Ice hockey is one of the fastest and most dangerous sports played worldwide. Its players are celebrated for their toughness, quickness, and their ability to perform on a playing surface that demands incredible coordination with little regard to personal safety. Whether measuring impacts from collisions or optimizing equipment design to improve player performance, having the ability to measure pressure exchanges can help researchers gather information to make the ice hockey safer, and more entertaining.

Ice hockey is a high-speed game that requires not only physical endurance but also the ability to withstand impacts and collisions. Thus requiring players to be at top form and have the proper protection without too much encumbrance that might limit their mobility. Research conducted bv Kendall et al. (2013)1, examined the effects of different shoulder pad designs on head acceleration simulating shoulder to head impacts in ice hockey.

With concussive injuries on the rise in the game, the National Hockey League (NHL) proposed removing the hard plastic caps inside shoulder pads to reduce the size of the pads. Because today’s NHL players are bigger and faster than ever before, sports equipment manufacturers have introduced advanced padding designs to keep players safe, while not inhibiting their abilities on the ice. However, this advanced padding may provide the players with a false sense of invisibility. As a result, players feel empowered to take more risks and hit other playersharder.

Researchers at the University of Ottawa examined how changes in shoulder pad design (no pad, Full pad with plastic inlay, full pad without plastic inlay and the new shoulder pad, designed with expanded polypropylene (EPP), influences components of concussive injury risk (i.e. peak linear and angular accelerations) following an impact to the head.

The primary research objective was the influence of shoulder pad design on the risks for concussive injury; a secondary component evaluated how much impact a player felt on the shoulder with each design.  A high-speed I-Scan™ pressure mapping system  was used to measure force/pressure at the endcap where the shoulder pad was secured, essentially measuring what the player may feel on shoulder joint during a shoulder to head impact.

The results of the study showed highest peak force in the no pad condition (145.7 N), which is to be expected since there is no protection. In terms of the different types of shoulder pad designs, the new EPP cap performed the best for reducing the damaging peak linear and angular accelerations to the head (112 g; 5880 rads/s2), while also adequately dissipating the impact forces (118.3 N) to the shoulder joint. While it didn’t reduce forces to the shoulder as much as the traditional shoulder pad (with plastic inlay), it is believed that it would still offer enough protection to the player, while allowing for the player to feel the impact enough to perhaps lose this feeling of “invisibility” to getting hurt.

The F-Scan system can obtain these three measures quite easily. Elite ice hockey players must have the ability to produce good plantar force in the acceleration phase and have high dynamic stability during the glide phase.

This study compared players wearing their own skates and the same players wearing customized skates engineered to optimize force transfer and control. The results of this study showed significant improvement in force generation and impulse across all participants with the optimized skates versus the players’ normal skates. The same results were observed with respect to the CoF variance. 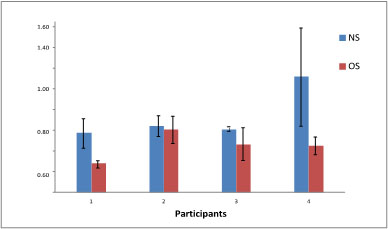 Comparison of CoF variance within subjects between both skate conditions. Image courtesy of Kendall et al.

According to the F-Scan data, optimized skate technology seemed to produce greater CoF variance over the players’ own skates. A higher CoF variance provides the player with the ability to move the body through the stance phase (glide phase) of skating in a more controlled manner to get them ready to take the next stride with the other leg.

This was a study with a small sample size of five participants. However, the study does show the possibilities of collecting important dynamic parameters on the ice, which could give some insight regarding how efficiently hockey players are moving on the ice that we might not normally be able to collect inside a lab. Data like this could help greatly in skill development, technique coaching or even in skate/equipment design.

Wearable technology is becoming increasingly accessible and these studies demonstrate the value they can provide for essential data on athletes in their natural athletic environment. The versatility of this type of sensor technology allows researchers to answer important research questions outside of a laboratory environment and allow the athletes to perform in their natural environments.

For More Ways Tekscan Technology can be used in Athletics Research, Download this free eBook Now!

Subscribe to Striking Measures to stay in the know.