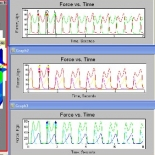 Gait asymmetry can be analyzed using the Force vs. Time graph in Tekscan's software. You can measure asymmetry, address the issue, and eliminate symptoms of discomfort and pain using the F-Scan in-shoe pressure measurement system.

When symmetry in foot function during gait is perturbed, undesired torque can be generated, and stress is transmitted along and within the tendons and muscles, ligaments and bones. Torque and stress are mechanical components that, over-time, place wear and tear on body tissues and can potentially cause symptoms of discomfort and pain. Asymmetry in gait can be measured using F-Scan™ System. Symptoms associated with gait asymmetry include:

Gait Curve of Asymmetry - Before

Note asymmetry in curve patterns. Right foot shows greater forces at toe-off (2) relative to left foot, and during heel strike (1) for both feet. Desired outcome is to reduce differences in peak forces during toe-off for right foot relative to right heel strike, and relative to heel strike and toe-off of left foot. 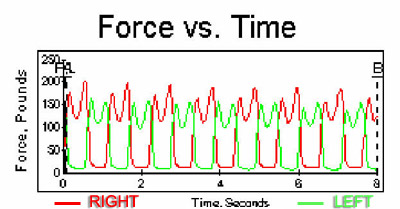 Note reduction of peak forces at toe-off for right foot with respect to right heel strike, and relative to heelstrike and toe-off of left foot. Some reduction in asymmetry has been achieved. 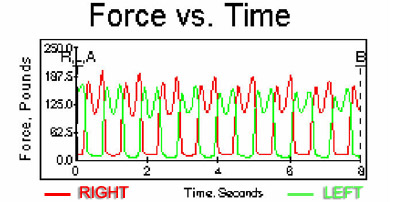 Gait Curve After Cut Out

Cut-outs in orthotic under 1st metatarsal heads now made.

1/8 inch heel did not have effect on peak forces and patterns of curves. Lower limb mechanics can be such that 1/8 inch under both heels has little effect on symmetry of gait for this patient.

Find out more about our products and solutions.