A commonly debated question in gait research surrounds the best methods to capture the most natural gait.  Force plates may be one of the more accurate tools available, but that can come with some limitations – especially when working with animals. The weight of the animal, paw size and their ability to follow commands are important factors weighing in on this decision.

There are two types of gait analysis systems, which have become increasing popular due their ability to mitigate some of the limitations presented by force plates: instrumented treadmills, and pressure measurement walkways or platforms.

In research conducted by Assaf, et al., “Evaluation of Parameters Obtained from Two Systems of Gait Analysis",1 Tekscan’s HR Walkway System was compared with a leading animal treadmill system to determine differences in calculated gait parameters between the two systems. 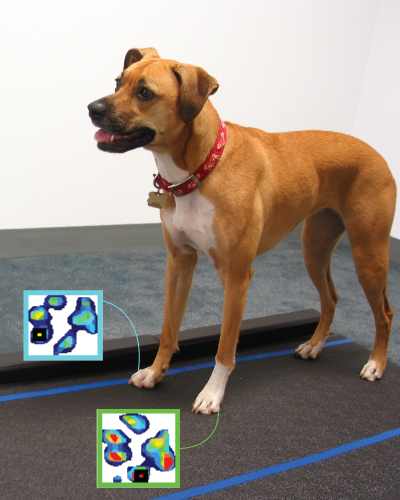 Tekscan offers several varieties of pressure measurement walkway systems to accommodate different sizes and types of animals The HR Walkway used in the study contains 33,408 sensing elements to provide high-resolution insights into force and pressure, as well as temporal and spatial parameters.  Values such as stance time, swing time, stride length, gait cycle time, percentage of body weight distribution and other gait parameters are automatically calculated. The system can also differentiate between quadruped and biped animals.

Twelve healthy Labrador Retriever dogs were used in the study and given time to acclimate to the system.  Assaf et al., found differences in the temporal/spatial parameters between both systems, however they found similarities between body weight percentages and pressure distribution.1

The researchers expected there would be differences in temporal/spatial parameters between the two systems, as they are two very different types of technologies.  In one case, the subjects are walking on a treadmill, which is determining the speed at which the dogs will walk, the other is over ground walking, where gait speed is determined by the dog.  In the paper, the authors state that, “Comparison of gait parameters obtained on a treadmill versus over ground has been a frequent matter of debate in both animals and human patients. It should be considered that the pressure-sensitive walkway is a static apparatus, whereas the treadmill is dynamic.” The authors hypothesize that, “The difference in surface friction conditions between gait systems may influence the stance percentage, since the treadmill has surface roughness in contracts to the smoothness of the pressure-sensitive walkway.”

In research, it’s important to keep consistencies between subjects and trials, so the evaluation can contain as few variables as possible. One advantage of a treadmill system is that it allows for a consistent gait speed during walking for each subject and between subjects. However, since the researcher controls the speed, one could argue that it is not a self-selected speed and could change the gait of the subject if they are not comfortable with it.  Additionally, the introduction of a treadmill for an animal could bring even more challenges, since they are not used to walking on one. So plenty of time to adjust to the system is necessary.  Certain species of animals, such as cats, might not be comfortable walking on treadmill.

There are advantages and disadvantages to each system, so it’s important to consider the types of animal patients/subjects that will be tested for gait analysis when selecting a system.

Dogs with major orthopedic disease can have difficulty acclimating to walking on a treadmill and those missing a limb cannot walk on it at all. Additionally, the animal treadmill system cannot provide peak vertical force (PVF), that Tekscan’s Animal Walkway can, which is a commonly analyzed parameter for gait in dogs.

Collecting animal gait data on a pressure-sensitive walkway, can provide advantages because it is more similar to natural walking for animals than a treadmill. The system could potentially allow for easier identification of pathologies as they naturally occur in their day-to-day activities. For those researchers or clinicians who treat a broad variety of animals species pressure measurement platforms provide versatility for testing.